The AOSSM Rebrand: Paying Respect to an Association’s Brand Heritage

The American Orthopaedic Society for Sports Medicine’s (AOSSM) impetus for their rebrand and the challenges they faced were consistent with what many of our clients face—the time had come for a change, but change brings a certain level of organizational angst. We helped them bring change to an organization that hadn’t seen change in 46 years. And, with little to no angst and drama.
Posted: 5 years ago

In an article in the June/July Issue of FORUM, published by the Association Forum, FORUM explored the challenges associations face when embarking on a brand refresh or new brand. Featured in the article were DJG client, the American Orthopaedic Society for Sports Medicine (AOSSM), and the recent association rebrand we worked with them on. AOSSM’s impetus for the rebrand and the challenges they faced were consistent with what many of our clients face—the time had come for a change, but change brings a certain level of organizational angst.

As Lisa Weisenberger, AOSSM Director of Marketing Communications, states in the article: “The rebrand was related to ensuring we were better engaging and interacting with members in our fast-paced and visually rich world. We wanted to take our look and bring it into the future.” AOSSM’s CEO, Greg Dummer, CAE, adds: “We are approaching our 50th anniversary and wanted to maintain the strong traditional commitment to our heritage. But we were also inspired by the younger orthopaedic professionals coming through the ranks.” Remaining relevant was extremely important to AOSSM—but AOSSM’s heritage was equally as important—especially given the relatively “young age” of the organization. At just under 50-years-old, many of the founding members are still active with AOSSM and have a long-term emotional investment in the brand’s history. In DJG’s experience, respect and reverence for an existing brand identity is fundamental to the successful acceptance of any association rebrand or new brand by an organization’s members and stakeholders. Throwing the baby out with the bathwater is generally not the best move—it’s all about identifying the essence of an existing identity and discovering new ways to reinterpret the brand for a new age. Weisenberger reflects this approach best when she says “Our new brand speaks to an evolution, not revolution, and ensures we honor both the tradition and the future, so the new members can move our organization forward even further.”

How we reinterpreted the AOSSM identity for a new age 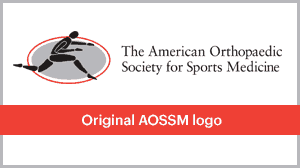 First … we dug into the history of the logo. AOSSM was founded in 1972; its logo was created in 1973 and, prior to the association’s rebrand, remained virtually unchanged. The logo was developed by an AOSSM member and features the “running man” to represent a human body in motion. It was generally agreed that the “running man” concept needed to be retained, but updated and represent the field of sports medicine. While we did explore some design options without it, ultimately the figure remains (re-dubbed the “running person”). As shown to the right, the new version has a more modern feel that reflects the athleticism the organization represents and re-defines the way the original logo used segments to communicate a musculoskeletal system. 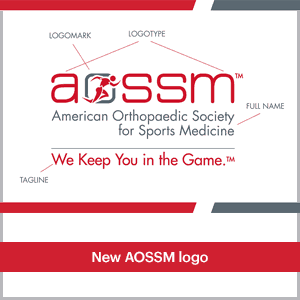 We also integrated the “running person” into the logotype making up the “O” of “AOSSM”, which delivers a sleek design that is self-contained and continued to represent AOSSM as sports medicine specialists. This is a nod to the original logo, which was encased in an oval device. The identity’s typography features a font that feels futuristic, but not so much so that it will feel outdated down the road. We used lowercase letters to add a contemporary touch and a sense of friendliness that reflects AOSSM’s membership. Lastly, we retained the use of red, as a tie to the original logo, which adds energy and, paired with grey, creates an overall professional approach. You’ll find additional examples of the new AOSSM brand below.

Ultimately, the updated identity concept was enthusiastically selected by AOSSM’s Board of Directors, and well received by the membership. It truly represented the orthopaedic sports medicine community, including their journal of sports medicine, and was showcased at the annual meeting and through educational activities.

Respecting the brand’s heritage (along with a branding education campaign, targeting the membership) helped AOSSM bring change to an organization that hadn’t seen a change in 46 years. And, with little to no angst and drama.

Congratulations to AOSSM on their new identity, and to Greg Dummer and Lisa Weisenberger for their coverage in the FORUM article. We’re honored that we could help “keep AOSSM in the game.”

To learn more about the AOSSM rebrand, or how we can help your organization update its identity, email Drew Navolio or call him at 630.305.0003, x319.

We use cookies on our website to give you the most relevant experience by remembering your preferences and repeat visits. By clicking “Accept”, you consent to the use of ALL the cookies.
.
Cookie SettingsAccept
Manage consent